An indigenous group proud of its craft tradition. They have survived through preserving their language and their strong weaving traditions.

The Wayuu people live in the desert peninsula of La Guajira at the northern tip of Colombia and the territory shared with Venezuela. According to legend, and to the stories told by the women of the Wayuu community, the tradition of weaving comes from Waleker, a spider that taught the Wayuu women how to weave.
Their ancient art is closely linked to the initiation rites of adolescent girls to womanhood. At the onset of the menstrual cycle, girls are required to enter a period of seclusion. 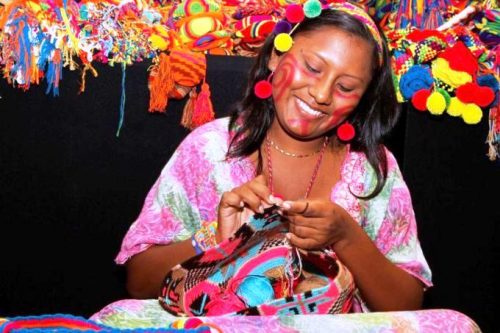 The Wayuu girls can remain secluded for months, in some cases even years. During this rite of passage called the ‘confinement’ rite, they are taught the Wayuu traditions, customs, culture and household tasks by their elders (mothers, grandmothers, aunts). One of the most important tasks for a Wayuu woman is the art of weaving. The intricate, hand-stitched, geometric motifs characterize the ancient Wayúu weaving and represent the elements found in the matriarchal structure of their society. The technique and the designs have been passed down from generation to generation. At the end of their seclusion, the girls are formally introduced into society as majayut (young ladies), ready to face the adult life in their communities which are distributed around the most important urban centres of the district of La Guajira, such as Riohacha, Uribia, Canyons, Nazareth, Maicao, Manaure and Bahia Portete. 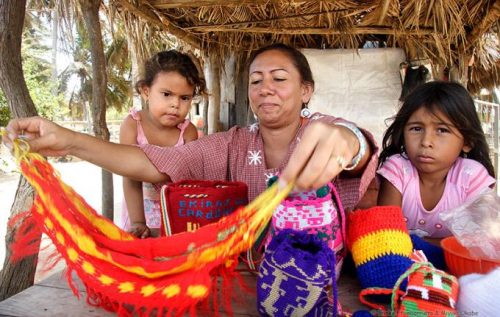 The Wayuu fabrics with their hand-stitched, colorful kanás (weaving designs), represent the elements of the society and daily life of these indigenous people, as well as elements of their natural environment, such as the universe, flowers, animals and, of course, their worldview. The more complex and elaborate the motifs are, the more valuable is the handcrafted piece.
The Wayuu women wave chinchorros (traditional Wayuu hammocks ), backpacks, mats, and sandals. Chinchorros and hammocks are the most representative works of this indigenous group, and although these two pieces serve the same function, they show marked differences: the Chinchorro hammock is elastic, with sparse weave, very soft when touched, but with very strong yarn quality, whereas modern hammocks are heavy and compact. However, the most common woven creations are the mochilas, or susu, small bags, made of colourful yarn with intricate patterns and motifs. They are the most sold product on the national and international market. 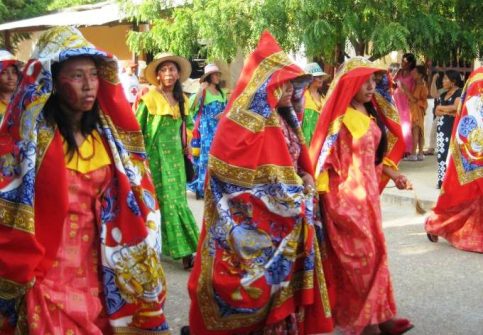 Wayuu women use the fiber from maguey cactus to crochet their traditional mochilas. Each bag is crocheted by just one Wayuu woman. A single Wayuu bag can take twenty-thirty days to complete depending on the crochet pattern. The Wayuushe’ or Wayuu Blanket is another Wayuu handcraft that is becoming popular. This is the traditional dress of the Wayuu women that can be made with cotton, silk or terlenka. The typical Wayuushe’ is square or rectangular; its neck may be a square ‘V’ or an oval waist. Inside the dress, in the front, there is a string that anchors the blanket or ‘manta’ at the waist; the string is knotted at the back of the dress which is loose.