The wise man of the Andean communities, who has the task to pass down the wisdom and knowledge to future generations.

The yatiri can be called in different ways, such as jampiri (healer), yachaj (the one who knows), aysiri, shaman, and other names depending on the region and the community. Yatiris are the continuators of the ancient amautas. Amauta means ‘master’ or ‘the wise one’ in Quechua and was a title for teachers in the Inca Empire, especially of children of the nobility. Yatiris are traditionally known as indigenous priests or wise men, because they are the ones who know the spirituality of the Quechua, Aymara and other original cultures. The yatiri is the person who can read and interpret the sacred coca leaves. He is the specialist in rituals and in natural medicine. 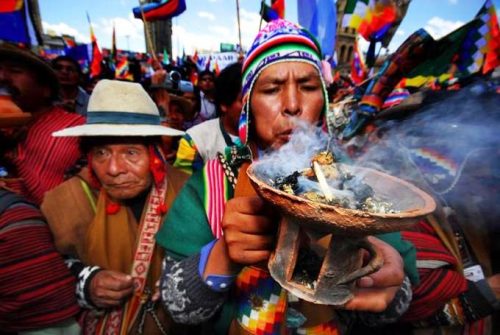 The origin of the yatiri is found in the divine and in the cosmos. That is why not any one can be a yatiri, since he is chosen by divine intervention. Lightning is one of the visible signs of the choice. According to traditional stories, lightning strikes twice: the first time it kills a human being, the second time it revives him. The one who survived the second lightning strike is designated to operate for sacred things. Dreams are also considered as signs of designation for spiritual service, and as signs of divine intervention.
The person who has been chosen through the signs mentioned above or others, must work for his own spiritual preparation in order to operate as a yatiri. He must consult an experienced teacher, who, by consulting coca leaves, indicates everything what the future yatiri must do during his training. The formation of a new yatiri includes two stages: during the first one the person to be formed must build a new house, the place for his preparation, where he will follow his teacher’s instructions to the letter. The apprentice begins his training with a solitary life in the new house; he must follow a white diet without salt and without condiments for three weeks. After having completed his spiritual retreat, he receives purification through a ritual and can then move on to the second stage of his formation. 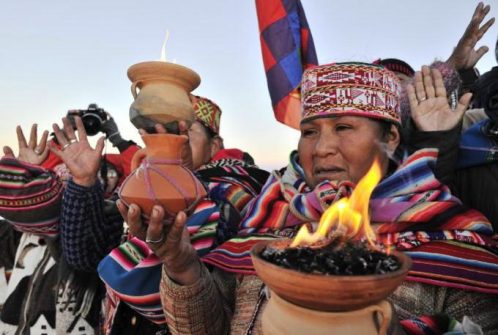 The second stage is the stage of learning the practice: in this phase, the future yatiri must assist his teacher during ceremonies and rites in order to learn the different rituals. The preparation to become a yatiri can take two or three years and depends on the teacher’s opinion. Only when the teacher thinks the person is ready to become a yatiri, will he communicate him what day and place the consecration will take place. The yatiri to be must prepare all the ritual elements necessary for the ceremony of consecration which will be held on the top of one of the sacred peaks, where the ajayus reside. There, his teacher will swear in him as yatiri and make him wear the ceremonial cloth. The new yatiri is consecrated by swearing to the achachilas, to the God of life, to the Pachamama and he commits himself to serving his community with humility and honesty, without doing evil. 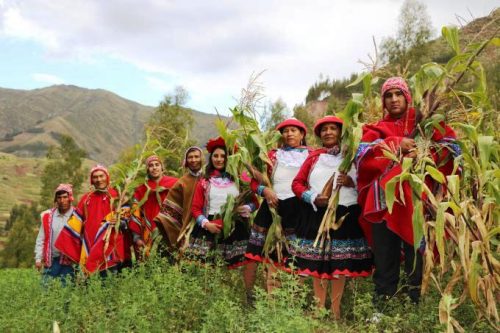 The role of a yatiri  consists of serving his community by offering ceremonial wilanchas (sacrifices) depending on the circumstances and needs. He must perform by offering rituals on special occasions, such as the beginning of the construction of a house, in order to ensure that this will be safely and successfully built. A yatiri also performs by offering rituals  to the Pachamama and the achachilas, following the agricultural calendar, during sowing and harvesting in order to protect crops from hail, frost and other natural phenomena. According to the Andean beliefs, these are signs of imbalance caused by human beings, so harmony with nature must be therefore restored through offerings and other rituals performed by the yatiri. 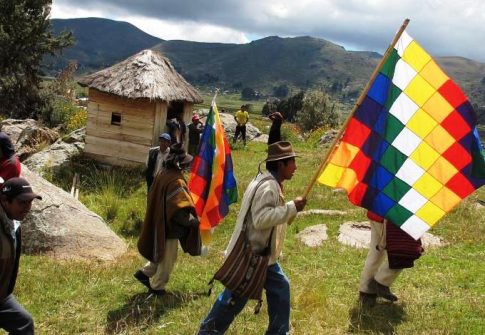 A  yatiri is also called to perform rituals when signs of imbalance are perceived within a family. In simple cases, he just burns incense and aromatic plants, but in more serious cases he must perform more complex healing rituals, according to the result of the coca leaf reading. A yatiri is supposed to offer his help and knowledge to those who are in difficulty and need spiritual and moral advice. That is why  yatiris  are respected, and appreciated for their service, for their moral and spiritual behaviour. A yatiri is the wise man of the Andean communities, and he also has the task to pass down the wisdom and knowledge he has acquired to future generations. Because it is only in this way that the Pacha (a Quechua word often translated with ‘world’, which may refer to the whole cosmos or to a specific moment in time) continues to generate and create life.