The original handcrafted clothes made with sheep, llama, alpaca, vicuña and other animals’ wool are not just garments made of valuable fabrics showing great combinations of meaningful colours, but they also symbolize the prestige of the original Andean dignity and identity.

The weaving process begins with the extraction of wool from sheep, alpacas, llamas, vicuñas and other animals. The wool extraction process is carried out in two ways: the  animal’s legs are tied by criss-crossing a rope around them and then the animal is sheared. The other way of shearing, instead, involves the  slaughtering of the animal, and then the wool is cut by passing a lid edge flush with its skin. The sheared wool is washed in the nearest rivers to the communities. The process of removing dirt is done by using sticks or by  stepping on the raw wool until all the dirt comes out, and then the wool is left to dry. When it is dry it is spun on a spinning wheel. The spun yarn is then wrapped in junis: balls of crossed and intertwined large loops. 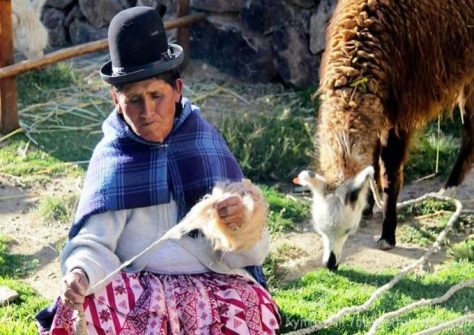 Once it is coloured, the yarn is left to dry and then it is twisted and spun again on a spinning wheel until the final fabric ball is obtained. There are different fabrics for several kinds of clothes such as: aguayo, phullu, ch’uspa, chumpi, costal, inkuña and other garments.
The colouring process of the wool threads has historical origins, but it has evolved over time and nowadays it has been replaced by the use of aniline and other chemical elements. According to what the old ones narrate, people once used natural elements to colour the  wool threads. The colour brown was extracted from maize corn, lilac or purple from purple maize, while cochineal, which can be found in the prickles of tuna, was used to produce red tints; the colour green was obtained from Kimsa k’uchu, the Ch’akatea and the yellow colour from ajrawayu. 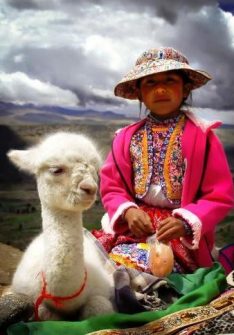 These natural ingredients were boiled in a container with plenty of water until the desired colour was obtained. At this point the juñis were immersed in the colour and some salt and lemon were added in order to  prevent colours from fading. One of the most common type of loom used to weave is the four-stake loom which has four corner sticks driven securely into the ground and two horizontal cross pieces around which the warp is wrapped. Weavers pass the ball of warp yarn back and forth to each other. All weaving is an interlacing of horizontal and vertical threads. Horizontal threads are called the weft. Vertical threads are called the warp. Different types of textiles are created depending on how the horizontal and vertical threads interweave. Weavers use the illawa, a tool used in weaving to keep the threads straight. 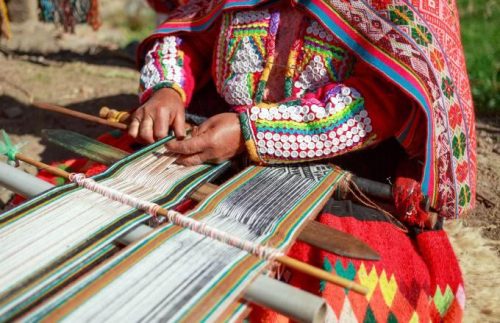 The yarn is passed through the weave horizontally (this phase is called miniy), then they cover the vertical threads, using the wich’una instrument to tighten the weave, usually a llama bone. Individual warp threads are isolated one at a time to wrap in front of or behind the weft that is passed horizontally through them in order to create different patterns. The individual warp threads are ‘picked up’ (arriba) and brought to the front of the loom or ‘dropped’ (abajo) and pushed to the back. Weavers also use other smaller instruments to weave indigenous and figurative representations (saltas). The Aguayo (big-squared weaves used to carry babies and small children on one’s back, or to seat, or to put food in), the poncho or the phullu, (blanket), are all typical Bolivian handmade weaves.
Andean artisan fabrics show different patterns and figures, and each figure has a particular meaning depending on the ayllu (political, social, economic, and administrative unit of the Andes). 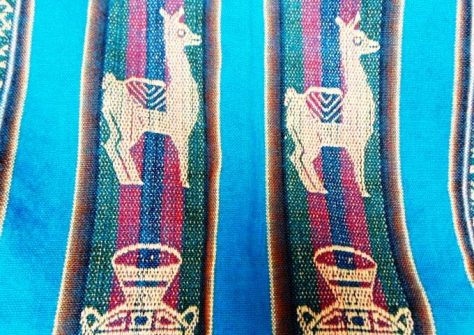 The typical figures and motifs are: the chuwa pattern that symbolizes a plate of common use, the Andean condor, which is a national symbol in Bolivia and is seen as  the protector of the indigenous people and the messenger between the divine world and the indigenous community; flowers which symbolize love, while ants are the symbol of perseverance and bravery, and the leaves of the molle tree represent resistance.
Colours are also extremely meaningful in the Andean fabrics: the red aguayo symbolizes the blood spilled from the sacrifice of animals to Pachamama (the Andean earth-mother figure). Pachamama is the highest divinity of the Andean people since she is concerned with fertility, plenty, the feminine, generosity and ripening crops, besides providing protection. The name Pachamama is translated into English as Mother Earth since pacha is a word in both Quechua and Aymara that means earth, cosmos, universe, time, space, etc. in English and mama means ‘mother’. But red is also the festive colour, red aguayos, in fact, are used for special places and events.
The green aguayo symbolizes the hope and blessing of nature, while black aguayos can symbolizes mystery or death. 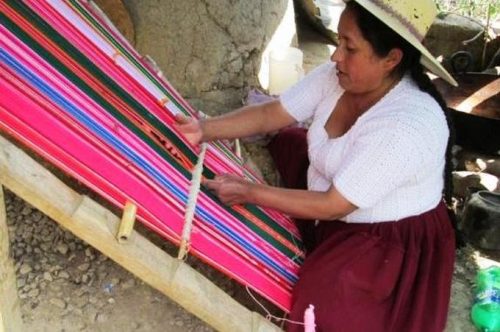 Andean fabrics are remarkable not only for their complex patterns or for the beauty of their colours and figures, but also for their artistic symbolism, since through their patterns, colours and figures, Andean textiles express the socio-political, cultural, economic and spiritual cosmovision of the Andean peoples. According to the old and wise members of the Andean communities, weaving fabrics is a way to dialogue with the pacha (mother earth) and with nature. Mother-earth provides people all that they need: food and medicinal herbs to heal wounds and diseases. Nature is the large garden that provides all elements to make and colour textiles. Over time though, things have changed, even symbols in the Andean fabrics: the figure of the llama is often replaced by the figure of a car, that of a condor by the figure of an airplane and so on.