Marriage involves a series of rituals, and four essential stages among the Quechua people of the Bolivian Andes: coca leaf reading, verbal commitment, asking for the bride’s hand and the official celebration of marriage.

The preparation for marriage among the Quechua and Aymara peoples starts during adolescence, when a Waynuchu (young man) and an imilla (young girl) are between 15 and 17 years old.
These indigenous people consider marriage as a sacred commitment that is essential for the continuity of human and community life, and therefore it must be well prepared.
So the parents of a 15/17 teenager ask a wise man or shaman to perform the coca leaf reading. This ritual, which is the first stage of the preparation for a marriage, is usually held on a night of a festive day such as the night of San Juan. The shaman, while invoking the souls of the dead (ajayus), the mountain spirits (achachilas) and other gods, lets the coca leaves drop three times. How the leaves fall is a message sent by the spirits. The shaman therefore tells the teenager, who is attending the ritual kneeling, about their personality, about a future partner and gives suggestions. The second stage starts when a young man falls in love with a girl. After courting and dating the girl, the young man informs his parents about his interest in her and if the parents approve their son’s choice, they go to the girl’s family to give their word about their son’s commitment. 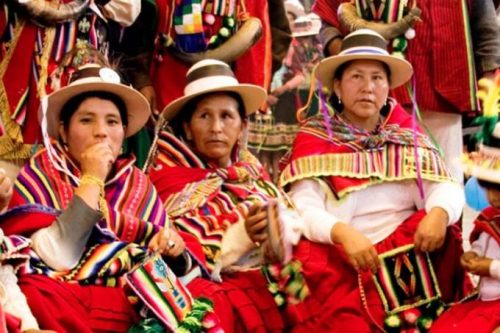 The girl’s parents, for their part, take into consideration several factors such as the young man’s personality, whether he is suitable to their daughter and, if it is so, they accept the marriage proposal. The third stage consists of the formalization of the marriage proposal. This may occur after a year or a little bit more, when the young man feels ready for marriage and married life. This time the young man goes personally and accompanied by his parents to the girl’s family to ask her parents for their daughter’s hand. The meeting between the two families begins with the ritual act called akulliku, that is coca leaf chewing. This is an occasion for dialogue and agreements between the two families. The meeting also marks the symbolic act of giving custody of the young man to the girl’s family and the custody of the girl to the prospective groom’s family. On this occasion the young couple is also given many suggestions and recommendations that are aimed at helping them to create a good family. After the akulliku, the ritual of forgiveness is performed. This ritual ends with a fraternal embrace between the members of the two families. 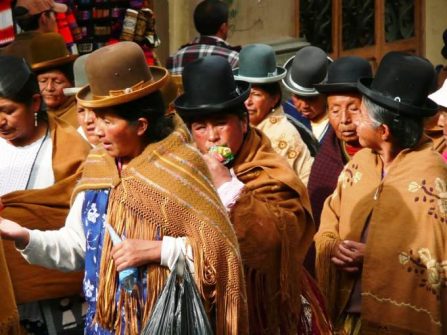 The place and date of the celebration of the wedding are also decided on that day after performing the coca leaf reading. At that point, the moment of the meal and ch’alla has arrived. Challa is a special kind of libation that is performed by spilling a small amount of chicha (corn liquor) on the floor. People usually give a toast to honour Pachamama and then they drink the rest. After the meal, the godfathers (the tiala and tiula) help the young man to wear new clothes and finally the young couple leaves.The last stage of the preparation for the Quechua marriage is its official celebration, which may take place after a year or two, or even more. The date which is usually chosen by the Quechua for the celebration of a wedding falls sometime between August and October. The celebration’s last four or five days and the preparations begin well in advance. One week before the wedding, people begin to prepare the chicha for the cha’alla. Chicha is a drink that has been prepared and consumed in communities throughout the Andes for millennia. The Inca used chicha for ritual purposes and consumed it in vast quantities during religious festivals. One day before the wedding, the Quechua people make t’antawawas (bread dolls), which will be offered to those that bring gifts. On the eve of the wedding day, between ten to twelve goats or sheep are sacrificed for the meal of the following day.
On the day of the wedding, the young couple in their wedding dresses along with their godparents and relatives go to the parish where their marriage will be formalized by a priest. After the ceremony the bride and the groom join the other people of the community to celebrate the event. 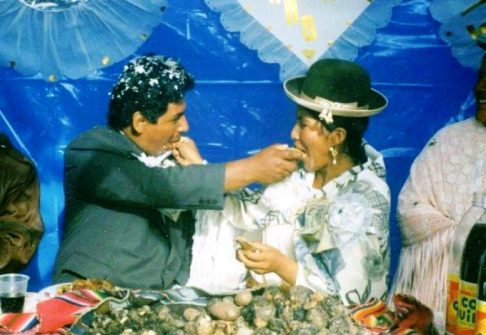 All the people sing and dance to the sound of the music performed by the charanguero, a musician who plays the charango, a small stringed instrument created by the Andean Indians of South America. The second day is the day of gifts and wedding guests; each one according to their economic means, bring to the couple, sheep, chickens, pigs, llamas, workInizio modulo   —    tools, pots, aguayos, ponchos and money. On the third day, the godfathers count all the gifts and make sure they are delivered to the place of the young couple. The fourth day is the day of ch’allachiku. The newlyweds dedicate a ch’alla to their godfathers and to all those who collaborated with the celebration of the wedding ceremony. The young couple, in this way, thank everybody for their help. This event concludes the wedding celebration and marks the beginning of a new family.