That is why every year, the Quechua people  climb to the peak of Andamarka and perform the ch’alla to ask for rain and avoid drought. The sacred peak of Andamarka is an hour’s walk from the community of K’isi k’isi.The ritual is organized by the jilanqo, that is, the person who serves as community authority on a rotating basis. This person is in charge of carrying out all the activities of the community; in case he failed to fulfill his duties and in case any bad event occurred to animals, crops and people, he would be considered the one responsible for that. 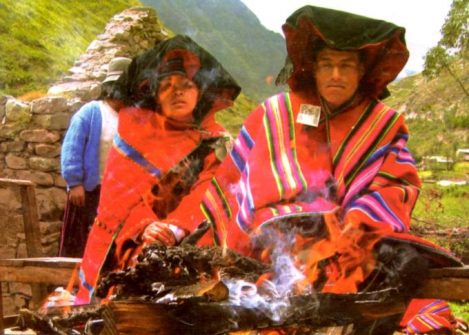 So the jilanqo seven days ahead of the day of the performance of the rainmaking ritual makes sure that the chicha preparation has started and two days before  the ritual he orders the hunt of twelve guinea pigs.
On Friday afternoon, the son-in-law of the jilanqo (the community authority) gets some chicha and along with his parents he performs
the ch’allar  ritual.
On Saturday morning, the authority of the community, along with the yatiri (the master of the rite) and the whole community climb to the peak of Andamarca. Some people carry chicha and food. When they reach the peak of Andamarca, the jilanqo along with his two sons-in-law, sets up two stone tables that represent the principle of pairs, that is, the male and female principles. Both tables are oriented towards the sunrise. Then the yatiri begins to prepare the ritual offering with aromatic herbs, dried llama, and invokes the awatiris (provider spirits). The yatiri asks the spirits to provide the community with abundance of sheep, cows, llamas and all those products that are essential for their sustenance. After doing so, the yatiri sacrifices a white lamb; he removes the heart from the animal and puts it in a clean container which is placed on a flat stone. 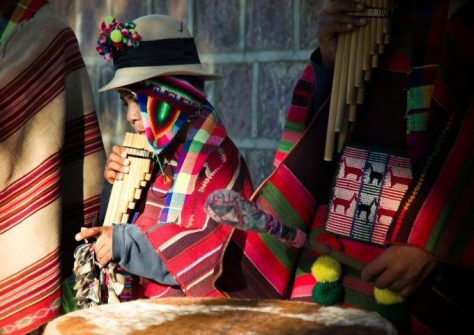 After the skin is removed from the lamb, the young people of the community offer the belly and guts of the animal to the sacred places. The lamb meat is cooked on embers without salt and all attendants eat it. The yatiri eats the head of the lamb. The son-in-law of the community authority, collects all the bones of the sacrificed animal and ties them with a red thread and gives them to the yatiri. At this point the yatiri makes the offering of six guinea pigs at the chullpas (funerary towers). The yatiri also makes other offerings at other sacred places using the bones of the lamb and the six guinea pigs left.
Then he distributes the piqa (small offering made with the blood of the slaughtered animal and with white flour and other ingredients) to each family so that they can make offerings to the uywiris and other spirits. When the ritual ceremony ends, people descend from the peak of Andamarca  while dancing and playing their pinkillus (wooden flutes, typical Andean instruments that are played during the  rainy season). 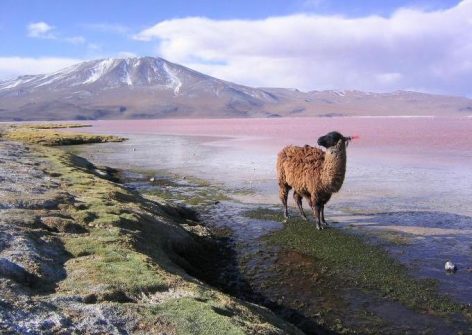 Once people are all back at the village the jilanqo invites everyone to share the kanka (ritual meal which was prepared at the peak of Andamarca). After the meal, the  ch’allar ritual is performed invoking all protector spirits, and asking for their blessing  and an abundance of animals and generous harvests. Making offerings at sacred places and to the Pachamama has great importance to us the Quechua people, since we believe that the God of life manifests himself through sacred places and his blessing gives life to all creation. Human beings are those who are aware of all this and are grateful for life and at the same time they know they must watch over the other beings of the universe. This is the reason why the rainmaking ritual must be performed by the members of the community of K’isi k’isi. All of them do this happily because they know that by doing so harmony is restored with the cosmos, with God and with the community.
Living in harmony with nature and people is what gives meaning to the cultural and spiritual existence of the Quechuas.