Spirit, body and the psyche are to be helped grow together in a journey of maturation to reach equilibrium and interior peace. This is a journey into one of the more meaningful religions of black Brazil.

Candomblé is one of the Afro-Brazilian religions underlying the black culture of Salvador da Bahia, perhaps the one that has remained most faithful to the original matrix and to the cult of the egum, the spirits of the ancestors. These religions are not simply transpositions of the African traditions whether Bantu or Yoruba but a re-elaboration and a “re-signification” of several traditions that have survived in secret, thanks to the intelligence and moral strength of the slaves. 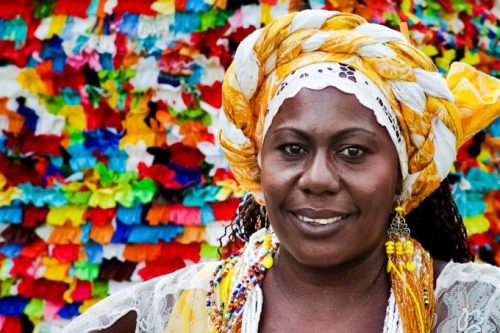 Almost 55% of the population of Bahia follow an Afro-Brazilian religion. The adherents are not only descendants of slaves but also the white and rich Brazilians who seek comfort and help in the welcoming arms of the ‘mães-de-santo’ (‘mothers of the saint’).
The descendants of the Yoruba (the Nigerian ethnic group that most influenced these cults) founded, towards the end of the nineteenth century, the most ancient terreiros among them Casa Branca, from which the Gantois and, in 1910, the llé Axé Opo Afonia derive.According to the ketu (from the city of Ketu, Nigeria), the mães-de-santos are the undisputed leaders of the community while the men follow the cult of the dead (egum). There seems to exist in Candomblé a clear distinction of roles and tasks related to gender. There is, in fact, a female principle that causes the believer ‘to be born again’ in the initiation by means of the orixá, and a male principle that takes care of the passage of the dead to the beyond (orum). 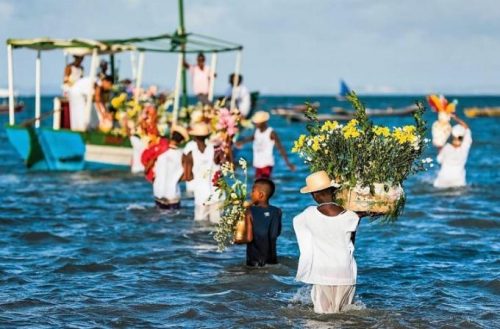 Candomblé is based upon the cult of the orixá which may be either divinities of the Yoruba cosmogony or kings divinised into energies of nature (water, earth, air, fire or plants). There also exists a Superior being, Olodu-marè who is the creator of the universe but lives far away from the earth and from mortals.
The connection between the earth (aiyé) and the orum comes about through the cult of the orixá. The first to be invoked is Exu, the oldest, primordial chaos, the engine that sets in motion the runa, the tireless divine messenger who opens the communicating door between these two parallel worlds. 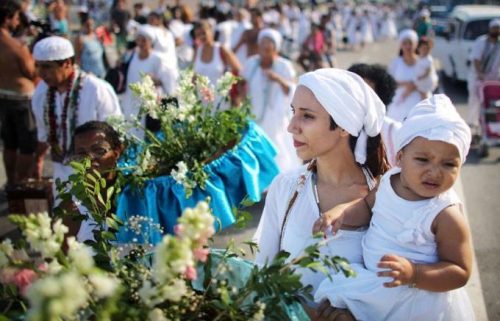 There is no separation between the aiyé and the orum: the two worlds communicate continually. It is the task of the priest to maintain the communication by means of rites. All human beings are sons and daughters of a divinity from whom they inherit physical and psychological characteristics.
However, not all can become sons or daughters of the saint, but only certain ones. Indicated directly by the divinity, they are called to be initiated and later they will take care of their own orixá.
The chosen priestesses and priests learn how to enter into contact with the divinities by means of rites and, sometimes, the trance.

It is believed that the orixá make use of dances especially to bring axé (magic-vital energy present in all beings, living or not) to the faithful. There exist two types of priests/priestesses: the rodantes (dancers) and the não rodantes (non- dancers). It is the rodantes who, during religious ceremonies, by means of a trance, offer their body as an ‘altar’ to the divinities who ‘descend’ among the faithful. The orixá meet together in the priestesses in trance and, through them, embrace the faithful in need of comfort and assistance. 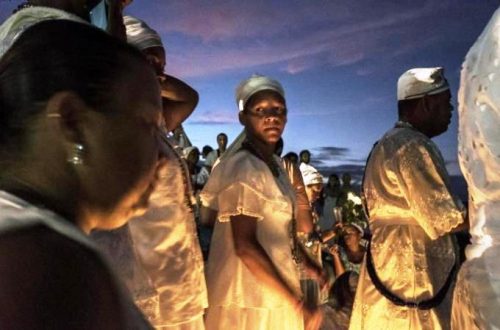 Priesthood is achieved only after a long period of initiation consisting in secret ceremonies and periods of enclosure and complete abandonment to the will of the orixá, so as to reach very profound interior change and a rearrangement of the values of life and the manner of relating to eternity. Candomblé is based upon communication with nature and the knowledge of human passions. These are transmitted by means of sacred stories, songs and dances. The entire liturgy is given over to non-verbal communication and, especially, to ritual art. Music, dances and colours are the elements that bring a person close to their interior life, with mythical images of reference and belonging. In this way one dances the sweetness of motherhood, the violence of war, the liveliness of the wind and the magic of fire and the heaviness of earth. 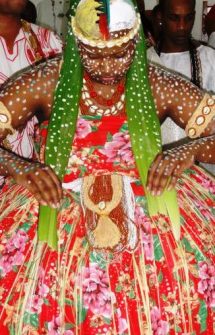 In the Candomblé religion, the body is not seen as something rigid and fixed: it is part of the spirit and is itself ‘spirito’, the foundation of experience in the world and the meeting place of the natural and social worlds. By means of musical rhythm, materialised in dance, the body transforms the mystical experience into cultural meaning. The fluidity of the dance shows the level of communication with the orixá. The trance is the point where the mystical experience is synthesised.
During the rites and dances, a sort of ‘deconstruction’ takes place of the person who is afterwards ‘rebuilt’ in such a way that they know how to communicate with all the energetic parts of which they are made. It is always the Exu who opens up this communication. The Candomblé faith is often defined as syncretic, derived from the fusion of the popular cult of Catholic saints with that of the pantheon of Yoruba divinities. The similarity between the Yoruba gods is based upon the iconography and colours of Catholic images. As a result, St. George, shown on horseback, has been associated with Oxóssi, the hunter; St. Lazarus, covered with wounds, has been compared to Omolu, the dangerous cholera divinity; Oiá-Iansã, the warrior goddess, depicted with sword in hand, has been ‘syncretised’ with St. Barbara. (S.B.)