Increasingly established designers, ever more inspired collections, ever more lavish fashion shows. The fashion world in Africa is experiencing a golden season. And soon the way we dress will change.

Africa is becoming increasingly fashionable. Events and festivals, either showcasing African creativity or drawing inspiration from this continent are multiplying all over the world from London, to Paris, New York, Toronto, and even in Wellington in New Zealand.
The colors, the patterns, and the elegance on display both fascinates and wins over audiences.
But, in Africa the emerging trend has now become structural: major international industry players and followers are now including fashion weeks in South Africa, Nigeria, Senegal, Rwanda, Ethiopia, and Kenya – among others – in their agendas. The venues are multiplying, and they boast an ever growing number of international partnerships and important sponsorships. 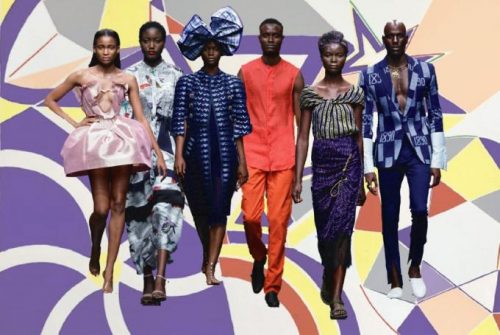 Adama Paris, a Senegalese designer, and the undisputed queen of African fashion, has introduced fashion shows to Dakar while and organizing and promoting Africa-related fashion events all over the world. To support her, throughout the effort, one of the most popular African photographers in the contemporary scene: her compatriot Omar Victor Diop, has been especially active in the field of fashion photography. Adama Paris has also created a television channel in Dakar, ‘Fashion Africa’ (fashiona-frica.tv), entirely dedicated to African fashion. It has become a very useful tool to get updates and ideas of all that’s ‘boiling in the pot’. For example, fashionistas can learn about the new collections by the most interesting brands on the African scene, including Xuly Bét, inspired by Malian designer Lamine Kouyaté, as well as Loza Maléombho, a promising designer, who was born in Brazil, raised in the USA only to end up in Ivory Coast.
She’s noted for mixing afro-fabrics with Brazilian details, marked by both bold and unstructured lines.

African Designers
Many African designers are becoming ever more recognized for their creativity, imagination and taste.
Sonia Mugabo, a young designer from Rwanda, has gained an international reputation for the special stylistic features of her creations. After a successful stint in New York, Sonia returned to Rwanda in 2013 where she founded the eponymous brand, characterized by the adoption and enhancement of traditional Rwandan designs. But Sonia Mugabo goes beyond aesthetics. 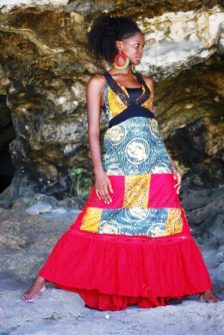 For her, fashion is an aspect of economic development, having the potential to create jobs and motivate young Rwandans to commit themselves to their rights as women. And then there’s the Andrea Iyamah line – conceived by Nigeria’s Dumebi Iyamah, when she was still a teenager – which has become rather popular in North America. Dumebi, style is strongly rooted in African traditions. Her swimwear and pret-à porter lines present bright colors with designs typical of her homeland. From Nigeria, Dumeli moved to Canada, where she settled in the Province of Ontario and opened her very own design studio. Canada, precisely to Ontario, where she opened her own studio.
Meanwhile, Cameroonian sisters Christelle and Michelle Nganhou made their way into the world of fashion in 2013, introducing the Grass Fields line. After moving to the United Kingdom, the two sisters, design their clothes and use only African made fabrics, importing them from Cameroon, Nigeria, Benin, Ghana and Ivory Coast for their creations. And then there’s South African designer Sindiso Khumalo and her unique fashions. Living in London, UK, the young Khumalo draws inspiration from the Zulu and Ndebele traditions (two of the various groups that populate South Africa), and the Bauhaus movement. She has established a label, bearing her own name. Sindiso designs the fabrics of her collections by hand, and she pays special attention to the ethical aspect of her profession. Indeed, she insists her clothes be crafted by hand in order to protect her workers and value their talents. 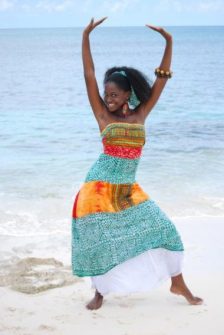 Born and raised in Ibadan, Nigeria, Wale Oyejide moved to the United States at a very young age, where he studied fashion design. Wale considers clothing to represent a means to challenge prejudices and stereotypes such that, his accessories, scarves or dresses are clothes as much as they are components of a language ​​of self-determination and dignity. Wale, who opened an atelier in the city of Philadelphia, has attracted many Hollywood stars: actors of the box-office and critical hit ‘Black Panther’ wore some of his creations in the movie, including the ‘From Wakanda with Love’ scarf – whose motifs symbolize African figures in front of an urban landscape – worn by star Chadwick Boseman.
Alphadi, whose real name is Seidnaly Sidhamed, is one of African fashion’s most influential figures. For decades, the Malian, Alphadi, born in Timbuktu, has enjoyed a recognition in the top circles (including European) of haute couture. He earned his fame thanks to his unique ability to combine the African textile tradition, especially in Niger, with more contemporary lines and shapes.

Design Schools
Now more than ever, the fashion system incorporates and weaves several elements from advertising to blogs, magazines, web platforms, showrooms, photo studios, model agencies, prestigious locations and, of course, schools and training centers. Until recently, there were just two types of African clothing makers: those who had learned in the field, and without going to specialized schools (like Oumou Sy); and those, far fewer, who studied abroad, perhaps in elite facilities (as did Alphadi). However, more frequently, many designers are have increasingly
studied their craft at home. 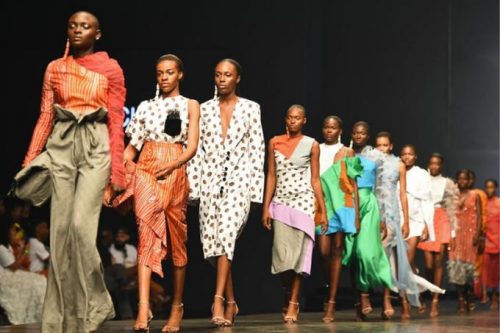 Indeed, Africa boasts a wide variety of college faculties and serious schools dedicated to the study of fashion design. And, many more young people choose to attend them. In Lagos, for example, there is the Oscar College of Fashion. Its peculiarity is to focus more on the entrepreneurial, rather than creative, aspects of the subject. For example, its students are encouraged to work more with pré’t-à-porter, which has higher growth and profit margins, than the traditional tailored suit. Aisha Obuobi, creative director of the Ghanaian brand ‘Christie Brown’, which has gained some fame abroad, studied at the ‘Vogue Style School of Fashion in Accra’, an excellent training facility, which was established in 1995. Recently, the school has started to offer distance learning classes and changed name to ‘Joyce Ababio College
of Creative Design’. 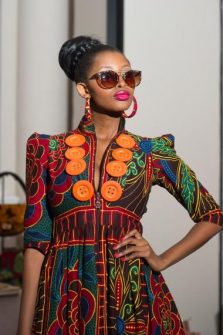 The ‘Evelyn College of Design in Nairobi’, which has recently celebrated its 45th anniversary, was the first ever fashion school in East Africa. Over time it has expanded, offering a wider variety of courses in such sectors as photography, interior design and graphics. Togo, Tanzania. Ethiopia also boast good fashion design schools; and then, there is South Africa, where the training systems conform with western standards. Among the various up and coming South African designers, many graduated in Cape Town, for example at the FEDISA school  or at the Design Academy of Fashion.

Traditional Fabrics
Stylists have shown a renewed interest in traditional African fabrics such as the Bogolan in Mali. In the Bambara language, Bobolan means “made with the earth”, but it’s actually a cotton fabric, and artisans still make it by hand, using only natural materials and – unusually given the frequent preference for loud color schemes in African fabrics – sober dominant colors such as black, white, brown, cream and various shades of ocher. The drawings recall ancestral symbolisms or tribal motifs or stylized references to nature.
Kente, is another fabric which African fashion designers enjoy using often. Kente means “interweaving” and it is made by interweaving long and narrow strips of fabric together, which are then stitched together to form precious fabrics. According to a legend, two brothers from the village of Bonwire, in the ancient Ashanti Kingdom in Ghana, made the first geometric Kente strip. The texture was so beautiful that it was adopted as an emblem of the Ashanti kings prestige and regal dignity. Bonwire, north-west of Accra, remains the most famous center for the processing of Kente. Its geometric patterns are not painted randomly. Indeed, they have a specific symbolism, inspired by human emotions, moral values, historical events, or even a certain character. 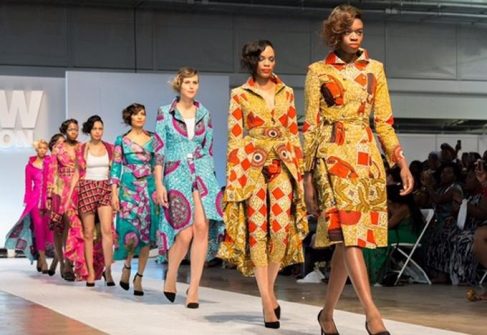 The shapes, stylized by skilled decorators, include leaves, fruits, fish, and sunsets. And they are meant to represent nature: Even the colors are not chosen at random. For example, brown is associated with Mother Earth and healing while gold represents royalty, as well as glory and spiritual purity.
Red symbolizes the blood of the ancestors while blue expresses peace and love and green symbolizes nature, evoking spiritual renewal.

Fashion Runs on Internet
The Internet acts as the main driver of growth for the African fashion system. Nigeria is the country that most clearly shows this relationship, whereby, online sales of clothing are the highest in the African continent, exceeding some US$250 million. Euromonitor, predicts that sales could increase to over a billion dollars in 2020. The Nigerians also heavily target the foreign market. Local entrepreneurs have launched two e-commerce platforms in the U.S. dedicated to luxury African brands in 2019: Onycheck (onychek.com) and Oxosi (oxosi.com). Among the designers involved in the establishment of the platforms is Amaka Osakwe, the creative mind behind Maki Oh. 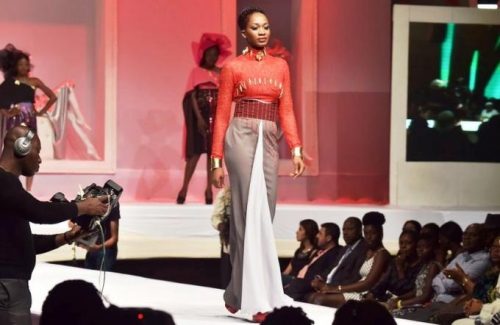 Outside Africa, the world of cultural communication has been paying increasing attention to African fashion. The designers are inspired, while the magazines dedicate special issues and museums offer dedicated exhibitions around this theme.
The subject of fashion, therefore, has become an integral aspect of other themes. Fashion presents itself as a formidable key to allow for an understanding of the African present in a historical, sociological and economic perspective. Many academic studies on Africa have highlighted, on the other hand, the social protagonist role that fabrics play, while practical and political relevance of clothing’s forms and methods in order to understand both social action and the political system within African realities. Despite notable contradictions, fashion in Africa has offered a surprising array of ways to understand the past and envisage the future. Yet, one thing seems certain, African creativity and imagination will no doubt stir and surprise the world’s catwalks.
Rosemary Eshiwani – Silvia Turrin – Stefania Ragusa