African women have made the right “to participate in political leadership and to influence the political process”. Their economic rights. From the street to the digital platform.

Over the last two decades, African women have made wide gains in the rights sphere as more countries became politically stable.  From political, socio-cultural and economic rights, there has been notable progress for instance the right to choose and participate in political leadership to the ability to influence the political process once elected, from transition and reform times to transitional justice processes. African women continue to be at the centre of political decision making both formal to informal. Gender issues that were once an afterthought or at the periphery, are being rightly pushed to occupy centre space in both political
and policy platforms. 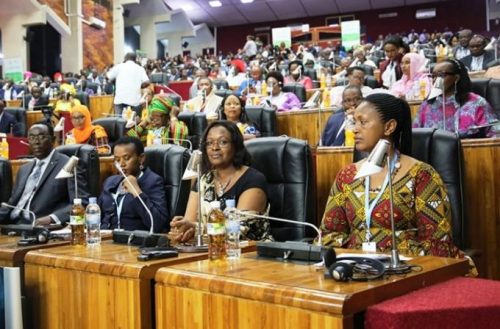 Rwanda has the highest percentage of women in parliament worldwide.

According to the UN, women representations in political decision making remains wanting across the globe. For instance “only 24 per cent of all national parliamentarians were women as of November 2018, a slow increase from 11.3 per cent in 1995.”  In Africa, the number stood at 26.6 percent with Rwanda having the highest number of women parliamentarians worldwide at 61.3 percent in the lower house.
Even with this slow progress, women’s presence in these processes has moved women’s concerns to be the centre of national debates, politics and policy. Issues like elimination of gender-based violence, reproductive rights, unpaid homecare work and gender-equality laws and electoral reform etc. 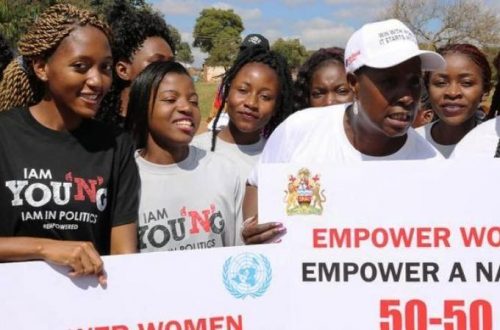 The work of feminists to ensure gender aware laws and policies on the continent cannot be underestimated. These policies didn’t happen as a result of the generosity of the ruling elite-mostly military men, it has taken and still taking feminists struggles to achieve these. In Kenya women make up just 19 per cent of the upper house, the National Assembly, and 27 per cent of the Senate. Despite the 2010 Constitution two-thirds gender principle that spells that no more than two-thirds of any elected or appointed body can be of the same gender, the country has not put in place any ways to actualized this and there’s high opposition to this rule. As one Kenyan feminist Marilyn Kamuru said  “All of these are just side shows of irrational patriarchy.”In recent Nigerian presidential elections held in February 2019, the main female candidate Oby Ezekwesili withdrew, the country still has the lowest numbers of women electedto public office remain around to 5.6 per cent.

No more tokenism
The struggle for voice and representation of women is a continuous and African feminists still demand that governments to go beyond the politics of symbolism where women are reduced to tokens. It was never just about numbers but how these increments in women in public offices trickles down to the improve the most marginalised in our countries. This is an uphill task in poor run young democracies.
For instance Rwanda’s highly ranks in numbers of women in public office, this doesn’t tally well when with actual political freedom and progress for women. In 2018 African feminists threw their weight to call for the release of  Diane Rwigara, who together with her mother were detained on trumped up charges of inciting violence and forgery after an attempt to contest for presidential elections. Rwigara was the second woman after opposition leader Victoire Ingabire who spent six years of a 15-year sentence for inciting insurrection. #FreeDianeRwigara and #FreeVictoireIngabire trended in African Twitterverse for some time until their release late 2018. 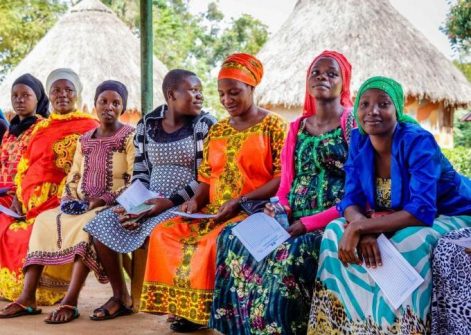 In most countries even with the few women in, the patterns of power and resource distribution remains rigged, the realities of overlapping forms of discrimination which reinforce women’s marginalization and unequal access to public and political spaces remain an impediment according to the ‘Study on discrimination against women in law and in practice in political and public life, including during times of political transitions’ by the Office of the United Nations High Commissioner for Human Rights.
Lack of transparency, heavy monetisation of electoral campaigns and violence are some of the factors still preventing many women and marginalised groups in Africa from accessing power. Also capitalism as a system of resource control and the widening inequality makes politics only accessible to the connected rich and powerful who cordon off power locking out citizens including young women. 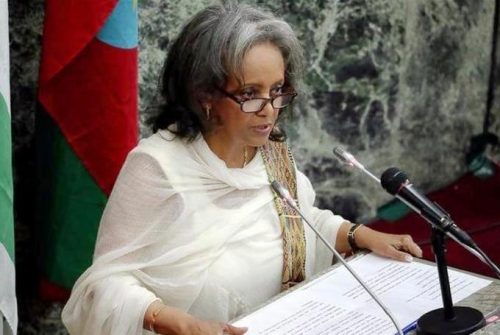 There are some bright spots like recent political changes in Ethiopia where Prime Minister Abiy Ahmed Ali appointed Ethiopia’s first woman president in Sahle-Work Zewde and a 50-50 gender balanced cabinet with women occupying key positions. He also appointed former female opposition leader as the head of the elections board and Ethiopia’s first female Supreme Court head. While these changes are exciting, feminist in the country hope that it is a start to the long journey to address challenges impede women’s full political participation. 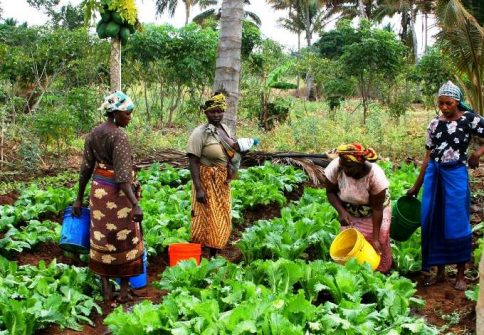 However most of these women remain engaged in informal, low paid and low-productive work with 76% working outside the formal non-agricultural sector compared to 59% for men. An equal share of women and men in the labour force, equal access to paid work remain top issues for those at the forefront of women’s rights struggle.
Unpaid care work continues to occupy public conversation even if it is not changing that fast on the ground. According to the ILO report on Care work and care jobs for the future of decent work worldwide by 2030, this number of people in need of care will reach 2.3 billion driven by increase in older persons and children. The burden of unpaid care work still rests mostly on women. Women perform 76.2 per cent of total hours of unpaid care work, more than three times as much as men globally and the same is true for Africa.

More educated, many more yet to go

Between 1990 to 2016 adult literacy in sub-Saharan Africa rose from 52% to 65% while youth literacy rate moved from 65% to 75%. Despite the progress, gender disparity in youth literacy persists according to UNESCO.  And while most countries’ constitutions guarantee right to education, the circumstances of most girls do not support access. 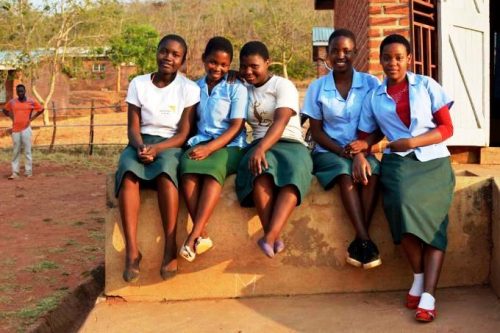 More than 49 million girls are out of primary and secondary school in sub-Saharan Africa and 40 percent of girls marry before age 18. Child marriage driven by social beliefs and lack of capital continue to deny many girls education. But in some cases the barriers are the very leaders like the President of Tanzania John P. Magufuli who lead a campaign to deny education  girls who get pregnant.
Where there’s support for girls’ education, it is not enough to have physical buildings  for most girls are from poor backgrounds. For many menstruation means no more school. For example about 30 percent of Ugandan girls miss school when they are in their periods. A prominent scholar attracted the wrath of the government when she started a campaign #Pad4GirlsUg.

Protests movements
After reports of rape of minors doubled in one year, Sierra Leone recently declared rape and sexual violence a “national emergency”. Recognizing sexual violence and moving to remove barriers to justice as well as confronting societal norms is what many women’s rights groups are pushing for.  In Malawi, women from different political parties and women’s rights groups rallied against violence in elections postponed in July this year after Veronica Katanga, a Muslim woman who was undressed by supporters of an opposing candidate in local elections and a video of the attack posted online.
Early March 2019 Puntland, north-eastern Somalia sentenced five men to death for the gang rape of a 16-year-old. In the same week, Aisha Ilyas Adan, a 12-year-old girl was raped and her body dismembered by seven boys known to her family.  Somali women took to the streets to protest this sexual violence which is heightened by the general insecurity and break down in the due to conflict.
There are more and more organised protests whether online or offline as women in different African countries force this to be a public conversation. #MenAreTrash, the powerful and provocative hashtag started in protest of sexual abuse and femicide in South Africa and soon it caught on and African feminists are using it increasingly to rudely challenge misogyny.  Still South African women in 2018 organised intersectional, marches across the cities in a #TotalShutDown where they reiterated ‘My Body, not Your Crime Scene’.  In March, Kenyan feminists followed in organising marches against heightened killings of women with #TotalShutDownKe. 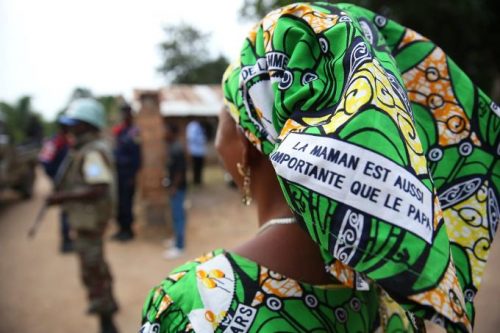 A Congolese woman defends and promotes the rights of women via a message printed on the fabric she wears.

In February 2019 Nigerian Twitter under #ArewaMeToo that rallied for women from North of Nigeria to speak about gender based violence after one Twitter user, Khadijah shared her own life experience. Many women took to the platform to share their personal stories breaking social barriers that put silence as the default response in the face of these violations.
No doubt the growth of digital platforms has expands ways in which young women can connect, mobilise and fight back together against sexist oppression. These very platforms have enabled reframing stories of women whose lives and contributions had been reduced. For instance in the wake of the death of South African struggle icon Winnie Mandela, young women took to social media to challenge the narratives and reclaim her story as a true freedom fighter.  What we know to be true especially about history is often the truth that those in power allow to be true. So often the history of African women’s contributions are minimized and undermined that’s why initiatives like the Museum of Women’s History in Zambia are crucial. As more young Africans seek to understand and deploy feminist politics the challenge remains for us to shape an African culture that is truly inclusive of all Africans in their diverse existences.