The long years of conflict have transformed Afghanistan into one of the worst countries in the world to be a child.
Being so young they have to struggle to survive and yet there is no shortage of dreams or ambition.

A loud explosion. A large black cloud of smoke darkens the blue sky over Kabul. The sound of ambulance sirens is added to the traffic chaos of the city. People sitting at tables outside a bar look up and stare at the black cloud. Nothing unusual in Kabul, just daily routine.
Lailò stops on the pavement with some other children. Her henna-stained hands tightly grasp a fruit the owner of a nearby vegetable stall gave her. She is less than a metre tall but her face is serious like that of an adult. She wears a faded veil that covers her hair. 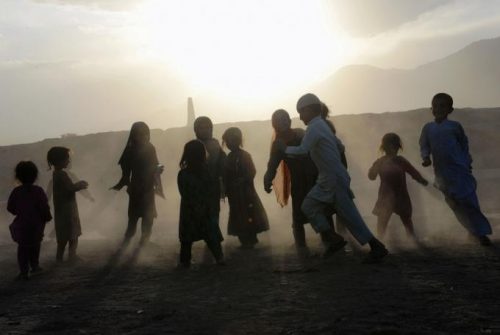 As soon as she has eaten her fruit she will go back to the line of cars, knocking on the windows as she begs for a little help. Lailò is only four.  “I have to help my family”, she says, “I have a brother and a sister both older than me. They too are working…”.
For many of the children of Kabul, infancy ends before its time, or may never happen since there is the pressure of finding something to eat for themselves and other family members, even before they are old enough to go to primary school.
In Afghanistan, the number of children in need of humanitarian aid in 2020 has jumped to 40% more than last year; in other words, 1.5 million more minors will need support just to survive.
This has been reported by Save the Children which highlights how eighteen long years of strife have transformed Afghanistan into one of the worst places in the world to be a child. 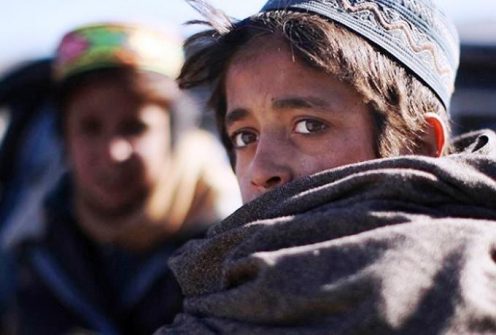 Zabi and Shagnam are brothers aged eight and ten. They are not begging but are selling something to the people in the bar. “I am selling chewing gum and try to get a few afghans together each day”, says  Zabi. “I decided to go to work after my father was admitted to hospital; we are four children and we have to take care of ourselves since our mother is dead. Our great dream is to have a real home one day; at the moment we live in a tent, in a camp full of sheds in the outskirts of Kabul”.
Zabi wears a traditional tunic called a kameez with its decorative circular embroidery round the collar and tells us he went to school for two years and then left. His sister Shagnam never went to school and so cannot read or write. “I work every day from morning to night”, she says; “there is no grown-up to help us when we go back to our tent so we keep one another company and help each other”. 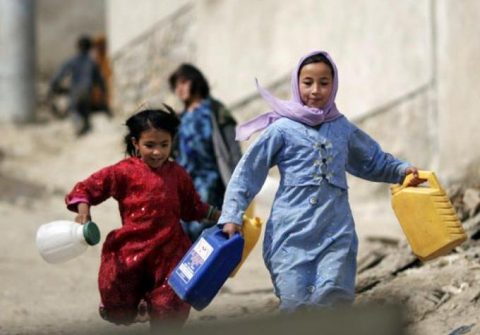 Little Shagnam has one ambition that, as time passes, seemed ever more impossible to realise: she wants to be a teacher, she who never had the chance to read a book or write in a copybook. One day she saw a girl helping a child to write and she began to feel a strong desire to be like her, to help her friends to learn how to read and write.
Farzana, a young teacher says: “ In such a young country where at least half the people live in absolute poverty, children play an important economic role in maintaining the family. The minors work all over, not only on the streets. When parents have a business they sell things, transport, and manufacture merchandise. In the rural areas they look after the cattle and cultivate the fields. Some of them also go to school but education is almost never their main occupation”.
Mawan is thirteen and starts his day at 5am: first he goes to the mosque to learn the Koran. Then from 9am to 1pm he attends school where he is in the eighth class after which he immediately goes to work in the streets. “I wash cars. My father is sick in hospital and cannot work so I have to do it”. He wants to become a doctor to help cure his father but he hasn’t the time to do his homework. When he goes home he has to wash the rags he will use again the next day washing cars. 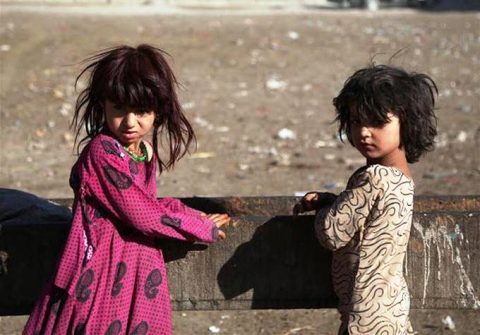 Ten-year-old Merajiddin is also up every day at the crack of dawn to go to the mosque and then to school. In the afternoon he begs among the lines of cars in the traffic jams of Kabul, one of the most polluted cities in the world. “I am the eldest of three children and I have to earn some money to feed my siblings and our mother. But I am happy with my daily life. I don’t get bored. I study and manage to save a bit. This year I frequented the second class and I want to continue with my education as long as I can combine work and school”.
His friend Abibullah keeps him company and tries to sell biros to the drivers. He, too, is ten years old and comes each day from Char Rahi, an eastern periphery of Kabul, about nine kilometres from the city centre. It usually takes him two hours on foot though occasionally he manages to climb aboard a minivan used for public transport. “I have five brothers and sisters and spend the day selling small items on the streets, items such as pens, block notes or chewing gum. I like selling things. I would like get a job in a shop selling things and earning a bit more…”. Abibullah points to another boy close by: they are wearing similar faded yellow shirts covered in stains and blackened by the smoke from the vehicles. “That’s my little brother Assadallah. He is eight and works with me. When we have only a few things to sell, he just begs”.
Assadallah speaks in whispers. He is a shy child and leaves the selling to his brother. “I stay here collecting money in a bottle”, he says; “I spend the whole day outside the restaurant and wait for someone to come out with some change in their hands. I used to go to school but my mother told me to give it up and go to work like my brother, since we never have enough money. I would have liked to become an engineer”.
It is even more difficult for girls to go to school. Some of them have not even been to school for the first primary class and thus never learned to read or write. Basma, is seven and shares her time between school and the street. Who knows how long this will continue. “My mother is poor”, she says with simplicity, “so we have to help each other. I sell biros, block notes, paper tissues… I would like to be a teacher, a doctor or even a minister and help to improve the country”. 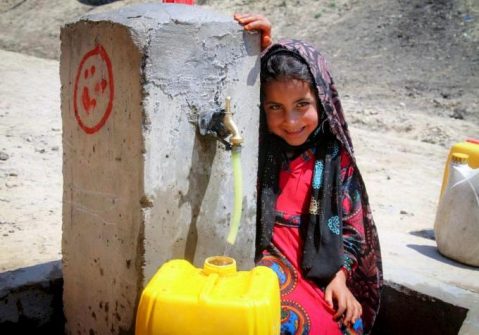 The dreams of the children of Kabul who have had no real childhood, clash with the daily need to bring some bread to the table, in a country where nothing can be taken for granted and where child labour is more or less accepted, even if officially outlawed.
For forty years now, Afghanistan has been bogged down in a war since the time when Soviet troops invaded the country on 24 December 1979. For forty years, its citizens have been killed, wounded and tortured. For three generations, its children have grown up traumatised. Thousands of people have been left disabled in all parts of the country. In 2019, more than ten thousand civilians were either killed or injured: according to a report by UNAMA, the UN mission in the country. According to the UN, the conflict last year caused 3,404 civilian deaths while a further 6,989 were injured, for a total of 10,393 people.
Last February, a peace accord was signed between the United States and the Taliban. It is a topic of conversation in the bars. Many are perplexed. The road to peace is still very long.
Night is falling and the children are counting their money. They are thinking of what they can buy to eat. In the tents of the shanty towns of Kabul, people are waiting for them.

Chefchaouen. The Blue Pearl of Morocco.