The Bahima are believed to be experts in producing milk and milk products like butter-milk, cow ghee and the eshabwe which was a dish served to special people on special occasions and also served to the family on special occasions and feasts.
Traditionally, the Bahima fed on milk, butter-milk, eshabwe, blood from cows and millet,  but since there was a lot of inter-marriages between the Bairu and the Bahima, then the Bairu with their farming culture got together with the Bahima and their herding culture. The result is that now the Bahima eat food like any other tribe in Uganda. The Bahima like many tribes in Uganda also have many different cultures they follow and respect. Among the many cultures they follow, marriage is one of the most respected and so is the  marriage ceremony. 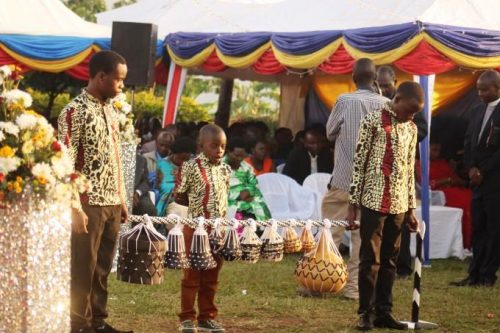 Many tribes in Uganda treat their in-laws with utmost respect and they are held in high esteem; this occurs to both in-laws from the woman’s family and man’s family. Every tribe/culture in Uganda treats their in-laws differently and with special food. Some tribes will slaughter a goat and cook it to honour an in-law, while others will slaughter a chicken and will also present them special gifts and special seats.
The Bahima too treat their in-laws with respect and hold them in high esteem, they will serve their in-laws a special meal in special dishes and plates. The meal is always an eshabwe meal served with millet bread which is presented in a small basket.
Apart from in-laws, in the olden days when the Bahima received a visitor at home, he would be served with the eshabwe meal.
That was the yardstick for one to know how important or special he was to that family. Just as in other cultures in Uganda who would slaughter chicken for special visitors. 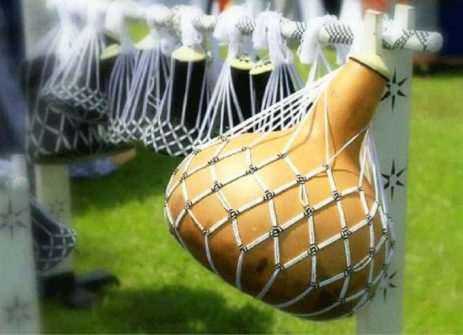 Eshabwe is a meal made from cow ghee, and also served at special functions and marriage ceremonies. This dish should be served within twenty hours or otherwise it will go bad. Today many families have refrigerators so they can store the eshabwe and keep it fresh.  On the day of the traditional marriage or give away ceremonies among the Bahima, the women will wake up early in the morning to begin the process of making the eshabwe since it’s not cooked. It takes a short time to mix the ingredients to make a recipe before the meal is ready to be served to the guest. The women will get cow ghee, a rock of sodium bi-carbonate which is then soaked in clean water.  The purpose of putting the sodium bi-carbonate in water is to dissolve it so that it can be used in making eshabwe. It is one of the main ingredients so that without it, one will not get eshabwe. It helps kill some bacteria in the ghee since they use raw ghee to make the dish and also serves as a catalyst during the process of making eshabwe.
Eshabwe is usually mixed with roasted beef, mushrooms, or served plain. But for the in-laws, it will be served with roasted beef.
In the olden days it was believed that when a muhima girl was preparing for marriage, the family would make plenty of cow ghee which will be used to make eshabwe for the ceremony and this ghee was made specially. It was believed that a girl getting ready for marriage was not allowed to leave the house before the ghee matured, otherwise the ghee would never mature and it would get spoilt.
It did not matter how long it took the ghee to mature it is said that she would be locked in the house between three-four months. On Dee- day, ghee was taken out, orwabya (clay-dish used for mixing eshabwe) was brought out, sodium bi-carbonate, a barbequed beef, table salt for seasoning, onions for flavour. 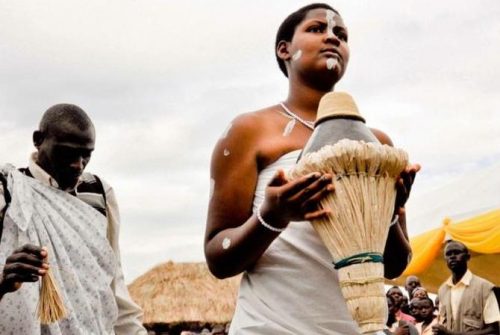 The ladies would put ghee in the clay-dish, with a spatula, mix the ghee with dissolved sodium bi-carbonate, and the process of making the eshabwe will begin. They will mix the sodium bicarbonate in the ghee and stir it until it changes its colour from yellow (colour of ghee) to white. Then it is filtered of any impurities before seasoning it with salt and onions for flavour and the barbequed beef will be added to the mixture, at this time the eshabwe is ready to be served.
The eshabwe is served in special dishes enough for one person, since this is a very special meal, it is then respectful to serve it to different guests in different plates so that they do not share it with anybody. The in-laws will be served in a clay plate with their millet bread served in baskets. In the Olden days, the eshabwe culture was purely a Bahima culture because they were, and are still, cattle keepers who had a lot of milk to make ghee, the main ingredient for it.
Meanwhile the Bairu, who were farmers, would serve their guests with millet and millet products. Today the Bairu have also adopted the eshabwe culture; not only have they adopted it, but it has extended to other parts of the country like Tooro.
Despite the fact that it has remained a dish served to special visitors during special occasions, some people in Ankole also prefer to serve it as part of their meals.